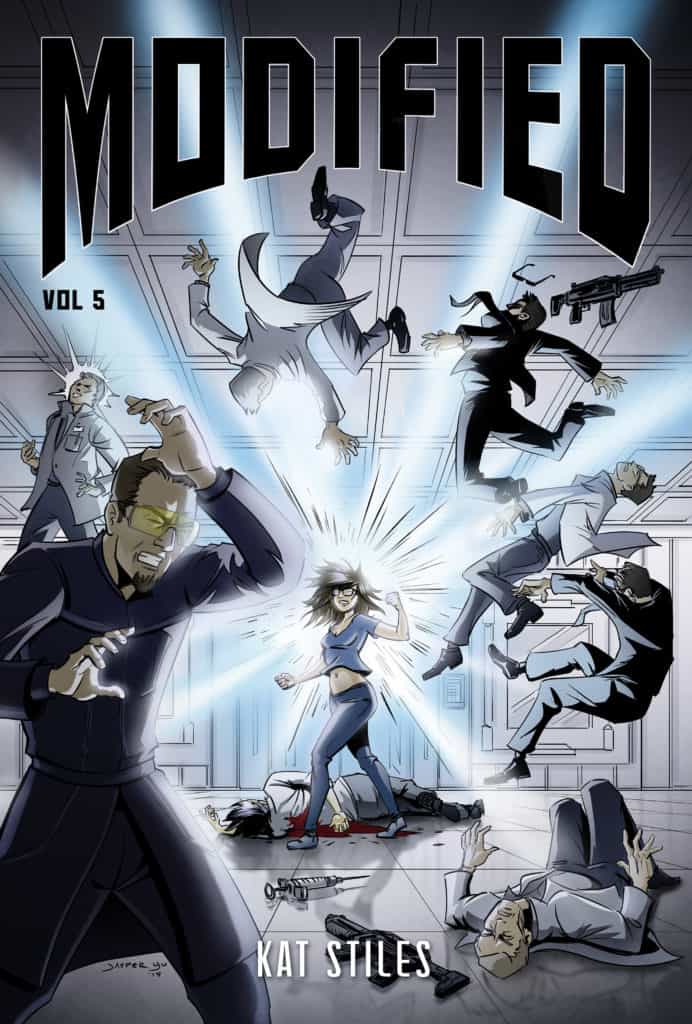 After rescuing Vi, Kate has to decide what to do with an unexpected guest who hitched a ride back with her, before he kills them all. With Kate’s powers evolving, it isn’t long before she discovers she has more control than she thinks.

Vi comes up with the perfect plan to be with Kate. But is Jay going to be okay with it?

Kate is desperate to take Derek down, but Derek has plans of his owns to acquire her power. Will she, Vi, Jay and Steve be able to rescue Steve’s daughter Lillian and stop Derek? Or will Derek finally get Kate’s power? Find out in this exciting conclusion to the Modified Series!

Fans of the first four volumes of Modified will enjoy this final installment in the fun short story series. New secrets, sexier scenes and a bunch of cool powers are waiting to be discovered in this tantalizing volume. If you enjoy super powered geeky characters, profanity, and sexy situations, then pick up your copy today and get Modified!

Reader Discretion is Advised: If you are offended by strong language or sexual situations, for the love of God don’t buy this series.

Little known fact #5: Healers are “connected” to those they’ve healed before, which gives them the unfortunate ability to experience severe pain as the person they’d healed experiences it. Of course I didn’t know that at the time, so Jay’s acute pain attack freaked me right the fuck out. He managed to explain what was going on, in half-sentences mixed with a scream or two. From the way he favored different areas of his body, it became obvious someone was kicking the shit out of Vi.

I tried to teleport to her, but the dampening field must’ve been preventing me. I helped Jay to his feet. “Can you do the distance healing thing with her?”

“It takes some…” he paused, groaning. “Time, to do that. She’ll be dead before…”

He held his ribs and seemed as if he were about to collapse again. I steadied him. “Jay, you’ve got to do the boost, teleport us to her.”

The compound itself was only a few hundred feet away, and I could just make out what appeared to be two guards heading towards us.

“I can’t, I’m not strong enough…” He grasped my upper arm, attempting to stay upright.

“You have to be.” I slid my hands along his jawline, brought his face to mine and kissed him.

At first, he was unresponsive, but then it was like something awoke within him. Heat surrounded us both, and in that warmth, he kissed me back—a perfectly sensual and healing kiss. When it ended, he rested his forehead against mine.

“Thanks, I needed that.” He took hold of my hands and the next thing I knew we were teleporting.

“WHERE IS SHE?” I heard a familiar voice yell as we materialized. It took me a second to recognize it: the Russian-sounding voice from my cell, when I was a prisoner.

We were in what I guessed was a questioning room–a table and a couple of chairs were the only furniture. Vi lay collapsed on the floor against the far wall, her face a swollen, bloody mess. She tried to smile when she saw us, but her busted lips barely moved. There was bruising by her ribs and stomach, too. Jay immediately ran to her side.

I focused on the behemoth that belonged to the voice I’d heard. “And just who the fuck are you?”

He was the largest man I’d ever laid eyes on, both in terms of height and girth, like professional body builder large. His shirt was half-torn off in the struggle, and although he didn’t have the muscles on muscles you see with body builders, he still looked ridiculously strong. A solid mass of a man.

Derek’s voice filled the room, but of course the cowardly fuck was nowhere to be seen. “Get her!”

“You!” the behemoth snarled, as he stomped towards me.

To say I was frightened, watching this giant of man come after me, would be a gross understatement. I was fucking terrified. But I didn’t have time to be scared. I focused on him, hoping Jay’s touch earlier was enough to give me my powers in this God forsaken place. It felt like I was getting through, but he kept advancing. A single thought reverberated in his mind: I must capture her. What the hell?
I concentrated, applying more pressure to his brain. His mind opened up to me: a failed suicide attempt, his modification and rehabilitation, which consisted mostly of Derek brainwashing him. His nose started to bleed, but he seemed totally unfazed. Why isn’t he feeling this?

He grabbed me by the neck and raised me in the air. With my feet dangling and my air cut off, “Jay…” was all I was able to squeak out.

Jay was in the process of healing Vi, but when he caught sight of me gasping for air, he leapt to his feet. “Let her go!” He bolted over to us and grabbed the behemoth’s arm.

The dude just laughed. “And why would I do that?”

“Because your nose is bleeding,” Jay said. “I’d be willing to bet Kate’s using her telepathic power on you right now.”

“I feel nothing,” he said, which sounded so much creepier with his accent and total confidence. I had to keep the pressure on…maybe something will get through.

Jay kept hold of his arm. I knew the futility of him trying to physically attack a man who outweighed him by at least a hundred pounds, but I thought he would try something. Then it dawned on me, when I saw his hand start to glow: he’s trying to heal the guy. But why would he do that? The last thing we needed was for this guy to be stronger.

The dude suddenly released me. I dropped to the floor, landing flat on my ass, but I didn’t give a shit. I was happy just to breathe again.
Jay’s strategy became clear when the dude grabbed hold of his head, as if he suddenly felt the pain of my attack. Jay’s healing must’ve made it possible for him to feel the effects of my power.

“What did you do to me?” the dude whispered, staring incredulously at Jay. He jerked his arm back, and Jay’s contact with him was broken.

The alarm sounded, and I suspected we only had seconds before we were all gassed with that migraine-inducing sleeping agent and trapped there. I wasn’t about to let Derek win again. “We have to go. Now!”

Jay nodded, and we both ran over to Vi, who managed to make it to her feet. He stood between us and touched us both on our shoulders.

There was a surge of heat, the boost to get past the dampening field.

In my peripheral vision, I noticed behemoth dude shake his head and then stare in our direction. Right as we started to teleport, the smoke began to pour in from the vents. I raised my middle finger high in the air, knowing Derek would see it.

Creepy dude leaped at us. I thought he missed, because we dematerialized out of the compound and back to the safety of Jay’s apartment.

But then I felt an oversized hand wrapped around my ankle. When I looked down, sure enough, the rest of behemoth dude was there along with it, sprawled out on Jay’s floor.