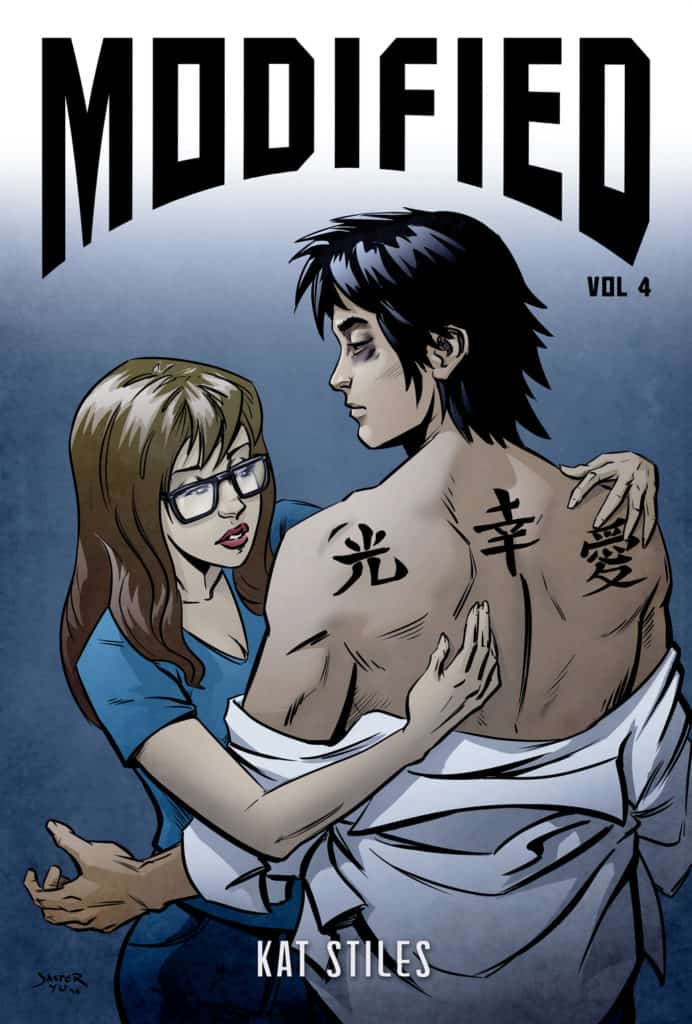 Sometimes geeks are more than what they seem…

Kate is rescued by Jay, who turns out to be more than just a mild-mannered programmer. As she learns more about him and his power, she sees him in a whole new light.

Derek is angered by Kate’s escape, and will stop at nothing to get her back. Despite his feelings for Kate, Steve has no choice but to do Derek’s bidding, if he ever wants to see his daughter again.

Still recovering from the incident with Alex, Kate is afraid of intimacy. But flirtatious Vi isn’t making it easy, with her sexy fantasies playing in her head.

Will Kate figure out how to stop Derek? Can she fix her past mistakes? And how long can she hold out before she gives in to Vi’s advances?

Fans of Modified Volumes 1-3 will enjoy this next sexy and fun installment of the series. If you like fast-paced serial type short stories filled with super powers, profanity, geeky characters and sexy situations, then you’ll love the Modified series. Pick up your copy today and get Modified!

Little known fact #4: Getting “sedated” or pumped full of tranquilizers, leaves you with the WORST head-splitting migraine when you wake back up.

I found myself in a sparsely furnished white room that contained only a table with two chairs and a bed against the far wall. My head pounded like I had seven shots of synth, a 250 proof alcohol from the 20s. Stuff went down like acid but it did the trick, and fast. If you didn’t die from alcohol poisoning the following day, the pain from the hangover would make you wish you were dead.

There was a thick glass wall on my left from ceiling to floor. The whole setup seemed odd until I realized it was some kind of modern prison cell. I scanned the room for any exits and found two—a huge metal door on the glass wall with a high-tech lock, and a regular door on the opposite wall, adjacent to the bed. I slowly made my way to my feet and approached the metal door. Of course it wouldn’t budge, and looking at its elaborate locking mechanism, I knew I wasn’t getting out that way.

The other door led to a white bathroom, complete with a small shower stall. I splashed some cold water on my face at the sink to shake off the grogginess. How long was I out? Without a clock or view of the outside, it was impossible to tell.

Then, it really dawned on me. I’m a prisoner. Of Derek Barker, of all people. Why didn’t I make his brain go poof, like the others?

Oh yeah, Steve. And his little girl. I may not be a hero, but I’m no villain either. I couldn’t let him lose his daughter forever.

I patted my skin dry with a towel and as I exited the bathroom, I heard a voice.

“That is a very impressive power you have, my dear.”

Derek’s pompous voice filled the cell. I looked around but didn’t see him anywhere.

“As much as I enjoy your company, I’m afraid I can’t risk another… incident.”

“Not cowardice, simply a reasonable precaution. I’ll be better prepared the next time we meet again in person.”

I wasn’t surprised that he could hear me. I held up both my middle fingers to confirm he could see me as well.

“Ah, I see you’re back to your old self.” He chuckled. “Feel free to take a shower, I’ve left a change of clothes in the bathroom cabinet.”

“Thanks, I feel so at home.” It unnerved me to only hear his voice. “So with all your fancy tech, audio is all you can manage?”

An image nearly the size of the far wall appeared, and Derek came into view. He sat behind his desk, wearing a different expensive suit. Daylight streamed in through the windows behind him.

Okay, so I was unconscious all night. Plausible, considering how many little darts they shot me with.

“Yes, thank you. Now I feel less silly flipping you off.” I raised both fingers high in the air, directed at the image on the wall. Even turned them on the side for the gangsta effect.

“Oh kitty Kate, you are a fun one. It’s almost a shame you won’t survive the extraction. Seldom ever do.” He swiped something on his tablet.

I lowered my arms and folded them across my chest. “That’s only if I don’t escape first.”

“You’d have a better chance escaping Rahway prison. No one gets past my security.”

After the famous jailbreak of 2022, Rahway prison was redone from top to bottom, equipped with all the latest tech. It was a fortress, and not a single soul has been able to penetrate the security since.

“Whatever. Not the first time some dickhead male has underestimated me.” Of course, I had no earthly clue how I would possibly escape. But I had to keep appearances up. With someone like Derek, confidence, even the fake kind, went a long way. Being an egomaniac, I suspected he got off on arrogance. Probably masturbated to a picture of himself.

“I look forward to seeing you try.” His smile faded. “You did surprise me last night. That was…unexpected.”

There was a change in his demeanor that unsettled me. Just looking at his expression, his body language, it was clear he was still upset at the momentary shift of control. I hoped his head still hurt from the pain I was able to inflict. Or at the very least, I hoped his suit was ruined.

“So when do you plan to kill me?” I asked. “You know, so I can pray to a higher source, get my affairs in order…”

His menacing expression grew more agitated. “This isn’t a joke. You will know pain unlike any you’ve ever experienced.”

“Ooh, that sounds uncomfortable. Maybe we can schedule it for next week? I’ve already reached my pain quota this week.”

He slammed his fists on his desk. My lips parted open in shock. I wanted to smile and do a little a dance, I was so happy to get under his skin.

He closed his eyes and took a deep breath, then exhaled. “Soon. You’ll find out soon, my dear.”

I plopped down on the bed. “Okay. I’ll see if I can clear my schedule.”

He didn’t respond but simply observed me. “You really are quite unique, despite your many obvious flaws.”

“Yep, that’s me, rainbow unicorn. Hey, speaking of schedules, I got a lot on my plate this afternoon, could we, uh…” I motioned the kill signal, a horizontal line across my throat.

The sound he uttered was like a groan/growl combination. It was the creepiest thing I’d ever heard, and that was saying a lot, being from Jersey.

“Until next time.” He cut the signal before I could fuck with him again.

I took a deep breath and ran my hands slowly down my face. When I looked up, I gasped. Just outside of my cell stood Jay. What is he doing here?