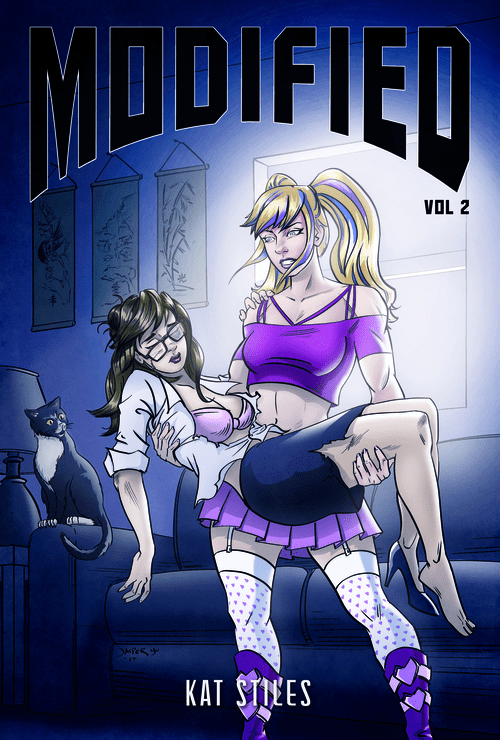 Modified Volume 2 is on sale now, at several fine retailers.

Things aren’t exactly looking up for Kate—if accidentally killing her boss isn’t enough, a handsome police officer shows up to question her. When she discovers there’s a security camera in her office, she freaks the hell out, sure she’s going straight to jail.

Kate begins to realize the awesome implications of her power, but knows she can’t always use it, no matter how tempted she might be. Her friends help cover up what really happened with Chad, but will she be able to keep cool around Mr. Sexy Cop?

One thing’s for sure, she’ll either get arrested or finally get laid…

Fans of Modified, Volume 1 will enjoy this second installment in the short story series, filled with super powered geeky characters, profanity, and sexy situations. Pick up your copy today and get Modified!

Little known fact #2: The sensation of teleportation is somewhat like the uneasy feeling you get on a plane, when the pilot dips the altitude too fast.

When Vi said she was still “getting the hang of it,” she failed to mention that she had not yet even begun to master the art of landings. We both stumbled into my living room, and the impact of the floor reopened the gash under my eye.

She apologized and lifted me in her arms. I could smell her perfume that close to her body, a sweet vanilla scent that went perfectly with her overall girly motif. She lay me carefully down onto the couch. Then she scurried out of the room and returned with a wet washcloth. Gently, she began patting the wound.

“Damn, I knew I should’ve popped in earlier,” she said. “I thought something was wrong.”

“He…he wasn’t moving when I left.” I felt detached, and all I could picture in my head was how still Chad was, lying on the floor.

Hearing her say it confirmed my suspicion. He was dead.

“No, no that can’t be right,” I said out loud, fighting against what I knew was the truth. “He was fine. No, he IS fine.” I sat upright, startling Vi.

“Why do you think I wanted to bolt?”

“He might be hurt though,” I said, ignoring her. “I should call an ambulance.”

Vi looked at me as if I were high. “Morgue is more like it,” she mumbled, shaking her head.

“Don’t say that, he’s fine.” I figured if I kept saying it, it might actually be true. I dug in my purse, looking for my cell phone. “Where the fuck is it?”

Frustrated, I threw the purse across the room. Then I broke down and cried.

Vi wrapped her arms around me. For awhile, I didn’t speak. When I finally calmed down enough, I relayed the whole fucked up incident to her. And as I retold it, what really happened to Chad became perfectly clear.

I felt a tear trickle down my cheek. It wasn’t because Chad specifically had died. It was more because a human being had died at my hands, regardless of however loosely I defined the term, “human being.”

“You can’t blame yourself, that’s bullshit,” Vi said. “He was about to rape you!”

“That doesn’t give me the right to take his life.” Panic set in as I wondered what to do next. Do I turn myself in? What would I say? How could I possibly explain what happened?