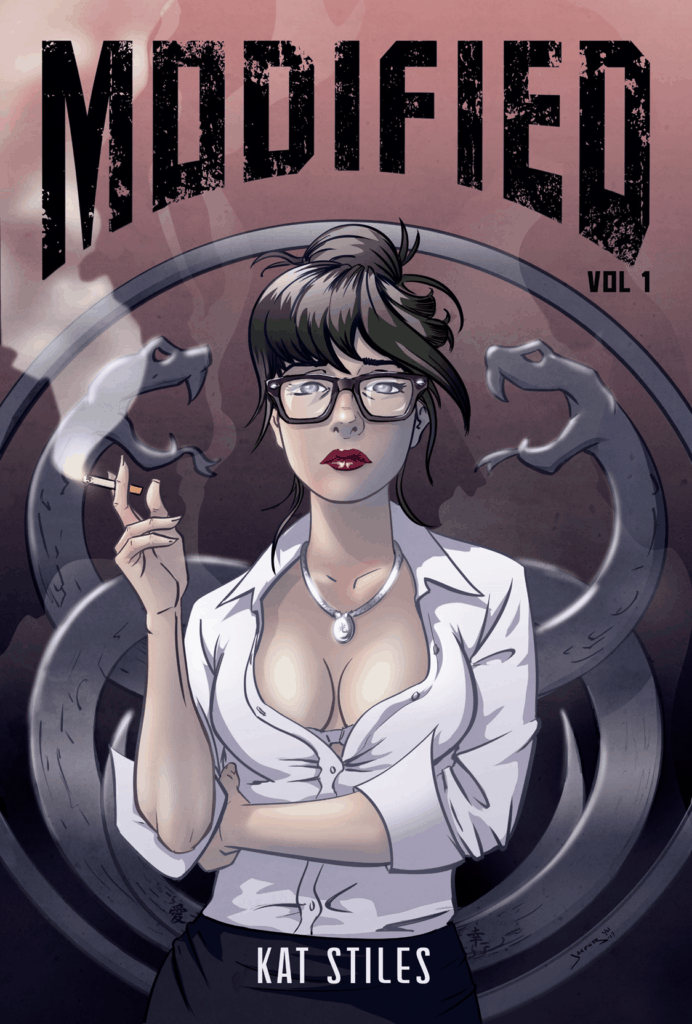 Kate has enough problems – a boss that’s a little too friendly, a sex life that’s non-existent, and a cat with zero tolerance for late meals. The last thing she needs is to be kidnapped, even if it is by a hot Brit.

Afterwards, she’s mysteriously returned and has no memory of what happened. She learns, with the help of an eccentric sexy woman, that she’s been modified – given a power unique to her talents. Sounds cool, right? It would be if she knew how to use it without killing everyone around her…

Modified is a funny, sexy, geeky romp about the trouble of acquiring an unexpected and inherently evil super power. With offbeat characters, profanity, and a healthy dose of salacious thoughts, it’s an entertaining short read, volume one of a serial type series.

Pick up your copy today and get Modified!

It’s a little known fact that when the human brain is under a tremendous amount of pressure, it lets out an audible “poof” sound, right as it gives out. A literal brain fart.

How do I know that? Well, I’ve killed people like this. Many times. Don’t get me wrong, I’m not evil. No, I’m not the villain—I’m absolutely sure of that. It just took me a while to control my modification.

I guess it’s better to start at the beginning. Then you can decide for yourself.

It started on a dark, rainy, and oh yeah, can’t forget stormy, night. I promised myself if I ever chronicled all this shit that I’d use as many adjectives as possible. And lots of vulgarity, for fuck’s sake. It’s not a masterpiece. But it is my story.

So on this totally shitty night, I was in my car, driving home from a job I had in the city, working as a DBA for a tech company: USAcom. The wages sucked, and the people sucked, but it was a job. My commute was only twenty minutes, but I stopped on the way. Fucking cigarettes. Ten dollars a pack and I still smoked. What was it, like 2020 when they put the additive in? Supposed to make them healthier for you, as if inhaling smoke into your lungs could ever be healthy. The additive just made them more addictive. It had been a full day since I had a cig, so I was pretty rabid and irritable.

Worn out from databasing all day, it was with great effort that I swung open the door to the rundown convenience store.

The dude from behind the counter looked up from his titty magazine. “Heyyyy…”

Startled by the flirtatious overtone, I gave him the once over. Classic male pattern baldness in its infancy with facial hair unshaven but not yet grown out to a beard, and the cherry on top—a cracked tooth in a smile that would have made even the most ambitious dentist cringe.

I say all this, but there I was, in a wrinkled oversized business suit, Buddy Holly glasses, frayed remnants of a bun atop my head, and dark circles under my eyes. Not exactly the picture of a woman looking to get laid. That’s when I noticed the top two buttons of my blouse were open, with my tits practically hanging out.

For a second, I thought about bolting. Then the nic fit kicked in full force. I hastily buttoned my shirt. Keeping my head down, I approached the counter.

“Can I get a packet of Scorpion Bliss?”

The lack of action on his part forced me to look back up. His goofy grin didn’t fade in the slightest, and up-close I was privy to not only that dazzling smile, but also the pungent odor of morning coffee gestating in the cesspool that was his mouth. I tried to hide my disgust with a fake smile. That was enough to spur him on to get the packet.

After I paid, he slid it over but kept his hand on it. I tried to take it, but he pulled back.

“Too slow!” The bizarre giggle he let out made me wonder if he was mentally challenged. It was the only thing that stopped me from reaching over the counter and punching him in the face.

His eyes lit up, and that’s when I realized it was a poor choice of words. Not that it would’ve mattered, I could’ve been talking about my grandmother dying and he still would’ve found a way to turn it into something sexual.

“Now you’re talking, sweet thing. I get off in an hour.” He released his hold of the cigarettes.

“Unlikely,” I muttered, as I grabbed the packet.

In my excitement, I nearly tripped out the door, catching my discount heels on the broken metal plate in the floor. His laugh followed me out the door, but I didn’t care. I ripped open the packet as soon as I stepped outside, and that delicious aroma of nicotine tickled my nose. Out of all the advances in the last few decades, sealing cigarettes in air-tight packets was probably my favorite. Until that wonderful day, I had no idea how good a cigarette could smell when it wasn’t stale.

My hands shook as I shoved a cigarette in my mouth, and I fumbled through my purse for my lighter, which seemed to be exactly nowhere. When I finally found it, the fucker wouldn’t even light. I shook it, hoping to coax the last bit of lighter fluid out of it, but it continued to laugh at me.

I sighed, dreading having to go back inside with Jethro the charming. I could only imagine what he would want in return for matches. I shuddered and looked to the ground instead, hoping someone had dropped a matchbook or something.

I practically jumped at the sound of the voice, which I guessed belonged to a Brit or Aussie. And when I turned to look, I dropped my purse and my jaw.

The man that stood before me was the anti-Jethro: dressed well, his face framed with neatly-styled long blond hair, stunning eyes the color of the Caribbean, and an alluring scent that I was sure was some kind of pheromone. I immediately regretted my decision to button my blouse back up.