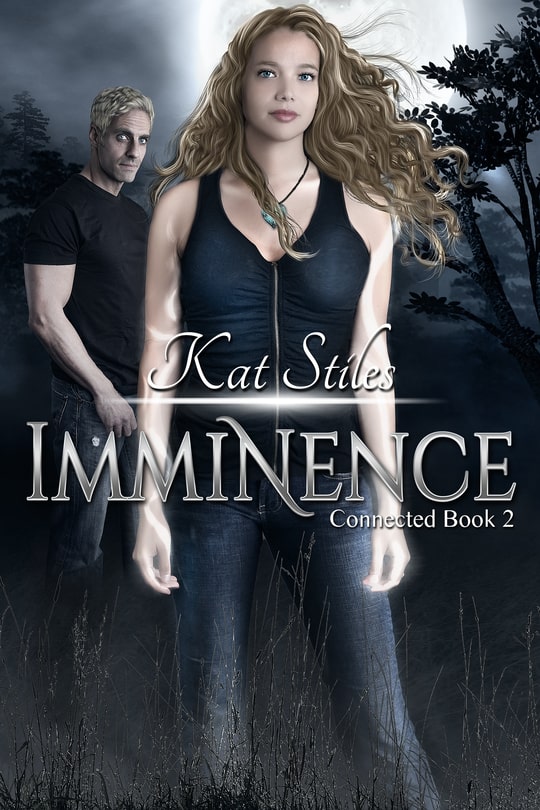 Cover art for Imminence, Book 2 in the Connected Series, by artist Taria Reed.

Imminence is on sale now at Amazon, and available in Kindle Unlimited

Em is certainly no stranger to nightmares.

Kidnapped by her own father when she was only five years old, the man who gave her life has stalked her nightmares for years, lurking in the darkest corners of her mind.

She thought he was dead. But when she gets an unexpected call from him, her greatest fear comes to life. Her father is back with super powers of his own, and Em’s powerful magic might not be enough to save her or her friends from what is to come.

Fans of the first book, Connected, will enjoy seeing teens Em, Roz, and Tommy together again in high school, as they unravel the mystery surrounding Em’s father. With new characters and a new romance to love, you’ll devour this latest installment in the Connected series.

Emily slipped into the kitchen through the back door, leaving her mother and sister behind in the backyard. From his vantage point in the living room, she looked like she’d grown since he last saw her, though only a month had passed.

“Daddy!” Blond pigtails bouncing, she ran up to him and gave him the biggest hug her little arms could.

“My sweet Emily, I missed you very much.”

“I’m so glad you’re back,” she said and yawned.

“Shh, how about we keep this our little secret, huh?” His gaze fixed on the back door. “Do you want to go on a trip with me?”

“Oooh, to Disney World? I’ve always wanted to go there.”

He tousled her hair playfully. “I’m afraid not, sweetie. Maybe someday we will.”

“Where are we going? Is Mommy and Sissy coming?”

He got up and peered out the back door window. His wife played with their eldest daughter, pushing her high on the swing. She was at an age where play days were becoming more and more rare. He recalled her last birthday request—to get a purse like her mother’s—and the memory was so bittersweet he almost reconsidered his plan. A single tear rolled down his cheek, as he thought about all the milestones he would miss in her life.

“Let’s get you all packed up, shall we?” He smiled at the little girl, who cheered and jumped up and down.

“I’m going on a trip,” she sang, as she skipped to her bedroom. “What should I bring?”

He found a small suitcase in the closet and started emptying the contents of her drawers in it.

“Oh, can I bring my stuffed animals?” Emily ensconced herself in a sea of fluffy toys.

“Only a few, baby. Your favorite ones.”

He zipped up the suitcase and grabbed it in one hand, and Emily’s hand in the other. He let out an exhale of relief.

Emily rubbed her eyes. “Need to give Mommy a kiss goodbye.”

“I’m sorry, there’s no time for that, my little love.”

With her arms full of toys, Emily trotted out of the room and toward the front door.

“Em, what’s going on?” her sister asked. “Mom was worried, you were taking so long to get a drink.”

Their father stepped out into view. “Lauren.”

“Couldn’t stay away. I missed you both too much.” He embraced his eldest daughter. She appeared to faint in his arms.

“You can come with us!” Emily said, dropping her toys and clapping her hands together. Then she noticed her sister’s head slumped forward against her father’s shoulder.

Her father hesitated, unsure of what to do. He lifted Lauren up, cradling her in his arms. “If you can just hold on, a little longer…”

“Daddy, what’s wrong with her? Is she sick?”

The tears flowed freely from his eyes now, as he placed her gently down on the couch. “Go to my car, Emily.”

“But what about Sissy, is she…”

The back door opened, and her mother gasped. She ran over to Lauren on the couch. “What did you do?”

The question, directed at her husband, came out more like an accusation. She took in the whole scene and glared at him. “Get out of this house.”

He stood in front of Emily. “I’m not leaving without her.”

“Daddy?” Emily looked up at her father, and then her mother.

“But Daddy said we’re going on a trip—”

“Go to your room now!” She closed her eyes and balled her hands into fists. In a softer tone, she added, “Please, Emily, right now.”

Emily’s eyes turned glassy. “But, I wanna go! We never go on trips!”

Her mother rose. She launched herself at him, raining down punches. But he was twice her size. He grabbed both of her arms to stop the assault and shoved her away. Her head hit the wall behind her, with more force than he intended. She slid to the floor, unresponsive.

Emily sobbed. “Mommy!” She ran to her mother and grabbed her hand. “Wake up, Mommy. Please.”

Her father checked her mother’s pulse. “She’s okay, baby, she’s…sleeping for a while.”

“It was an accident,” he said, stroking her hair. “I would never intentionally hurt any of you. I love you.”

Emily’s tears continued to fall. “I…I don’t know.” Her gaze switched back to her silent mother. With a shaking hand, she reached for her mother’s face. But her mother didn’t wake up.

“No, I want to stay here.” She hugged her mother, her sobs growing louder.

He wiped the tears from his eyes and took a deep breath. “We’re going. Now.”

With great difficulty, he pried the little girl off her still mother. She kicked and screamed at her father, until she ran out of energy. He held her tight against his chest, and kissed her head. “Relax now, baby.”

And in his arms, in his loving embrace, she lost consciousness.